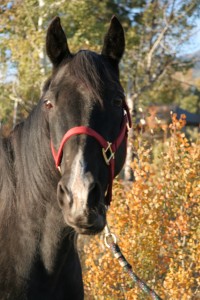 Galaxy came to the Ranch in 2012 with his stable mate, Geronimo.  Both were donated to us by a wonderful couple in New Mexico who had tried for a long time to have children and finally had become pregnant.  Feeling that they would not be able to ride or give their horses the attention they deserved, they wanted their horses to go to a home where they could be useful and fully appreciated.

At the Ranch both horses quickly became adopted as favorites by special children.  Tragically, a few months after they arrived Geronimo had a serious seizure and had to be euthanized. Galaxy has continued on, still charming children and adults alike with his handsome good looks and long Tennessee Walker stride.