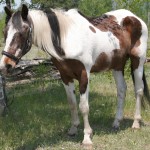 The little horse with the big heart – that was our Chief.  He was the horse that started it all, allowing us to begin working with the very first kids to come to the Ranch.

Chief, a small paint Mustang, had been abandoned by his previous owners who moved out of state, and given to us by the loving and concerned boarding facility owner where he had been staying.  He quickly moved into our hearts in a big way with his kind and gentle nature.  He loved to see the kids come to get him from the pasture, and would put up with anything without fuss in return for the hugs and affection they showered upon him.

We were never quite sure how old Chief was, but estimated that at the time of his death he was around 34 years old.  At his advanced age he was still in good shape, and in 2013 even carried a young rider all the way through the 4th of July parade!

Chief was once called “the best-loved horse on the Ranch,” and this was undoubtedly true.  Being steady and willing, he began the training of almost all our young riders.

Chief’s passing has left us with a hole in the herd and in our hearts, but his memory will never leave us.

Chief – We love you. 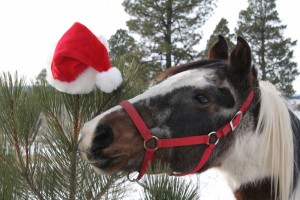