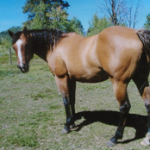 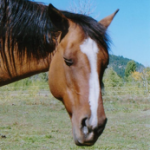 With more of my own children riding than we had horses to mount them on, Tigger was bought as an addition to our small herd of two. Very athletic with a comical side, she quickly earned her name. My son and she established a rapport (I think they both have trouble with authority!) and became a team, teaching each other and learning together.

Within 2 weeks of moving to Colorado, Tigger became seriously injured by barbed wire. She healed well, and other than superficial scars on the inside of her front leg, shows no sign of the horrifying wound she received.

Tigger had proven herself as a session horse when she developed a cataract in her right eye in 2017.  She became blind in that eye and is still learning how to function without sight on one side.